Dawn Kadish DVM
Dawn brings a great deal of experience to Dog Sports Centre. Dawn has been involved in dog training since 1985 and has been a veterinarian since 1990. As well, Dawn breeds Border collies and competes in a wide variety of dog sports. She has competed successfully with her dogs in obedience, flyball, agility, tracking, disc dog, herding, games competitions and even weight pulling! Dawn brings a deep love and understanding of dogs to her classes as well as the joy of playing and bringing out your dog’s hidden skills. Dawn is a judge for the Canadian Disc Dog Association (CDDA) and a masters judge for the Agility Association of Canada (AAC). She also enjoys presenting seminars on dog training and Canine First Aid throughout Canada and the USA. Dawn evaluates dog behaviour for the SPCA and provides a consultation program for dogs with behaviour problems. 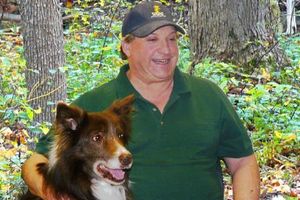 Howard Kadish CPDT
Howard thinks of dogs as your best buddy and partner first and foremost. Howard enjoys using play to motivate and drive dogs to perform their best. Howard was the driving force behind the foundation of the Canadian Disc Dog Association and is well known for his exciting, energetic and fast-paced Disc Freestyle routines with his border collies Zac & Zed. He is very good at explaining the steps to develop the skills needed to be successful in the sport of disc dog. Howard’s entertaining style makes classes fun for the owners as well as the dogs. Howard has trained several disc dog Champions and successfully competed in Flyball earning a Grand Championship title with one dog and winning both regional and division championships. Howard's dog Zed is ranked number one in Canada and is the first dog to earn the prestigious Disc Dog Elite Champion title. Howard is also a cruelty investigator for the SPCA.
In 2008 Howard and his dog Zed qualified at the AAC Ontario Regional Championships and went on to compete at the Canadian National Agility Championships in Sussex New Brunswick. Howard has travelled all over the USA and Canada giving seminars and clinics. He is a Certified Professional Dog Trainer (CPDT) one of only a few in Canada! Vicki is a terrific addition to our training staff.  She understands how dogs think and wants to help owners build the kind of mutually beneficial relationship with their dogs that we all want.  Vicki has three dogs of her own, Jib a border collie, Lady a sheltie and Penny a Border collie cross.  Vicki competes in agility, dock diving and disc dog competitions with her dogs.  Vicki is always quick with a smile and happy to share her knowledge and skills.  As well as working with her own dogs and teaching others, Vicki is also an OSPCA agent.  Vicki has dedicated her life to the improvement of the quality of the life of all animals